This week we had a roast dinner booked in for 5pm at The Morpeth Arms near Pimlico – opposite mi6 and down the road from mi5.

There were some clear dangers with this plan for an anonymous, traitorous, Britain-hating, roast-dinner munching, remoaner such as myself. Namely that by 5pm, there was a chance that the roast dinners would have run out, and by 5pm, it would be quite likely that the unroasted potatoes would have been sat there all day, and not just a morning.

I’ve never done any analysis, but for pubs that are not hugely busy, I hypothesise that the earlier you go the better a roast dinner would be. For the reason that food will have been standing around, potentially under drying heat lamps, for much less time.

You could say it is unfair of me to review places at differing times – but I disagree. Venues should be able to provide their optimal roast dinner throughout their serving period. You wouldn’t go to Burger King and expect a decent burger at a particular time. Or any time.

Upon arrival at The Morpeth Arms, I was shown to our table. I was the first to arrive, and it was only me and a handful of football-watching “Germans” (were they really Germans?) in the restaurant area of the pub (a ha ha ha ha ha ha). Yes there was a big screen with the football showing, at a fair volume, with some tinny hi-hat sounds in my left ear coming from the kitchen radio.

I was not entirely relaxed. Also our table, which was balanced on a horizontal beam, would rock backwards and forwards quite significantly – when I rested my arms on the table, my side of the table would lunge down around 3-4cm. Hardly conducive to either dining or drinking safely.

I mentioned this to the person who was serving me, who agreed that it rocked back and forwards. Didn’t offer me another table. I was too hungover to consider a move on my own volition. But at least I’d had it confirmed to me that the table moved backwards and forwards. You just know that there’s a 12.5% service charge coming up, don’t you?

Roasts on offer were beef, chicken, pork and vegetarian – meats priced between £15 and £16, with the vegetarian at £13. The tarragon and garlic roast chicken sounded interesting, but alas they had run out of it. I then considered the beef, but again they had run out.

Pork or vegetarian were the only two options. Less choice – must be a Brexit dividend! Let’s celebrate!!

Dinner took around 20 minutes to arrive, though that was only because we asked for a short delay – we were originally advised 10 minutes. Upon arrival, it looked…interesting. Jeez how many times am I going to use the word ‘though’?

Starting with the carrots which were cut in a style reminding me of slightly scrappy sweet potato fries, at first I found these quite appealing, though the slightly dry, tired nature soon grated on me. The honey-roasted taste was (thankfully) slight, and they were a touch under-cooked for my personal tastes. More carrots than ideal too.

The rather yellow cauliflower was excellent. Sadly not enough of it, but it had been spiced – I’d suggest turmeric and a hint of cumin – really enjoyable, tasty and inventive. Kudos.

Also enjoyable was the cabbage. Ever so-slightly smoky, also with a hint of spices – though I suspect the latter aspect more to do with how close it was to the cauliflower, and the former to do with the gravy. Possibly the first time I have been served Hispi cabbage in an enjoyable format – here’s looking at you, Pig & Butcher.

Time for a game of How Long Have The Unroasted Roast Potatoes Been Stood There For, hosted in my imagination by a topless Les Dennis. 4 roast potatoes were supplied, all fairly large in size. Unsurprisingly they were not crispy on the outside – tough in places but not crispy. The insides were not fluffy, but they weren’t inedible either. They were begrudgingly acceptable, but only acceptable in comparison to how rare proper roasties are. I’m willing to believe they were cooked in goose fat, there was at least a hint of said flavouring.

The double-egg Yorkshire pudding had a nice solid form to it – crispy sides, soft bottom. However it was burnt, and the top 1cm or so of it tasted of being burnt. The unburnt bit was nice, good texture and a nice eggy compliment to the pork.

There were two quite thinly cut slices of pork loin. They were a little dry…well…they were quite dry. One of my accomplices complained about too much fat though for me they were perfect in that sense, the other complained about them being dry – and her slices of pork loin really were dry. On the bright side the pork was smoked, pretty heavily smoked but I enjoyed the flavour. Maybe it had just spent too long under heat lamps?

Crackling was advertised as crispy, and boy was this crispy to the point of being inedible. It probably shouldn’t have been on the plate, and seemed to have more salt than your average council gritting lorry at the beginning of winter (at least prior to the first few frosts). I don’t leave food. Yet I left almost all of the crackling strands.

The gravy was fairly thin though at least had some consistency to it. However it also had bits of mushroom in it – and tasted of mushroom. Our conclusion was that we had been served mushroom gravy. The menu had offered “gravy” unless one had the vegetarian, in which case it offered mushroom gravy. I assume they ran out of normal gravy. Not an issue – the mushroom gravy was tasty. Quite smoky too.

[jetpack_subscription_form subscribe_button=”Sign Me Up”]

Clearly more thought had gone into this roast dinner than usual, there was a conspicuous effort to add some creativity to what can be a very predictable meal.

Sadly this didn’t always work. The cauliflower, in particular was brilliant – my highlight. I probably enjoyed the carrots least, though the worst part was the crackling – I should have took some and submitted it to the Natural History Museum for display along with their other historic rock formations.

Unusually nothing was average. Nothing was just plain old acceptable. Which makes reviewing the food easier – I less feel the need to talk about my sex life or drugs that I don’t actually do because I’m really boring and pretty damn old now, and instead actually have something other to say than “carrots were roasted…erm…they were decent…erm…”. I don’t think that I am still quite ready to be writing for The Guardian.

There was quite a bit more inventiveness on offer than the standard roast, and I really wish I could incorporate this more into the score. However there was much more that disappointed than delighted, and as such I’m only giving it a 6.69 out of 10.

Quite possibly if I had turned up several hours earlier, I may not have ended up with a burnt yorkie, the pork may not have been so dry, the crackling may still have verged on edible. But I can only review what I receive.

There is definitely potential there.

There was, unsurprisingly, a 12.5% service charge for the extreme challenge of taking our plates the 5 metres from kitchen to table (which we had by this point changed due to excessive wobbliness…twice). And for recommending me Fosters when they had run out of Camden Hells.

However, on the bright side, they hadn’t charged me for one of the beers, so I took it as my Brexit dividend and kept quiet. Nobody will know.

Kudos, however, to the young lady behind the bar who knew her beer.

Next Sunday the plan is to go somewhere a tiny bit more upmarket. Gastropub kind of thing. It could be beautiful – or it might just look beautiful. 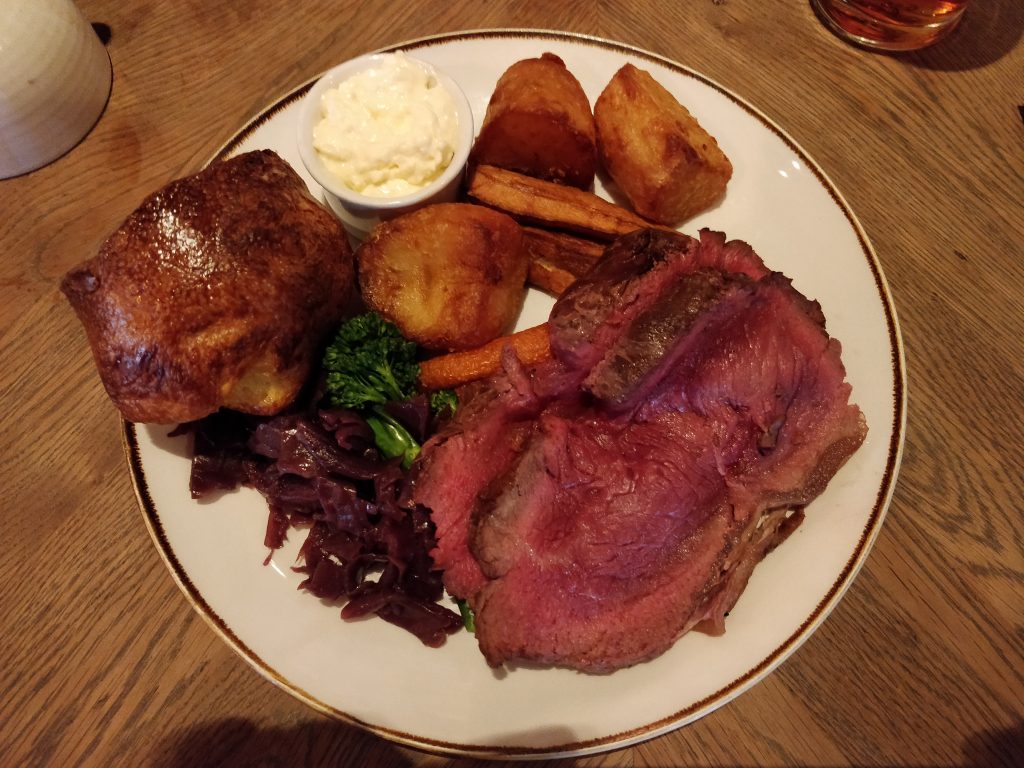 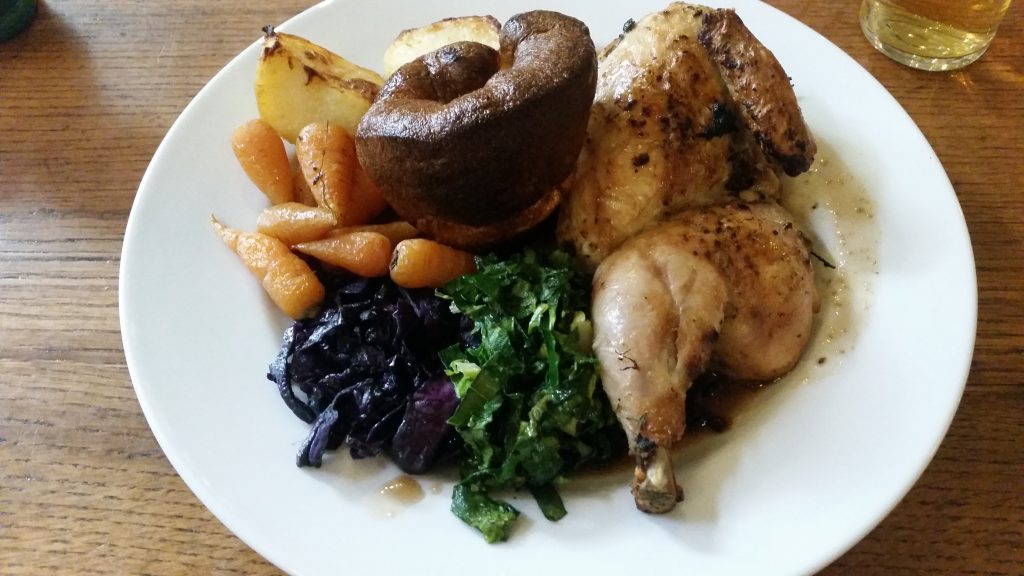